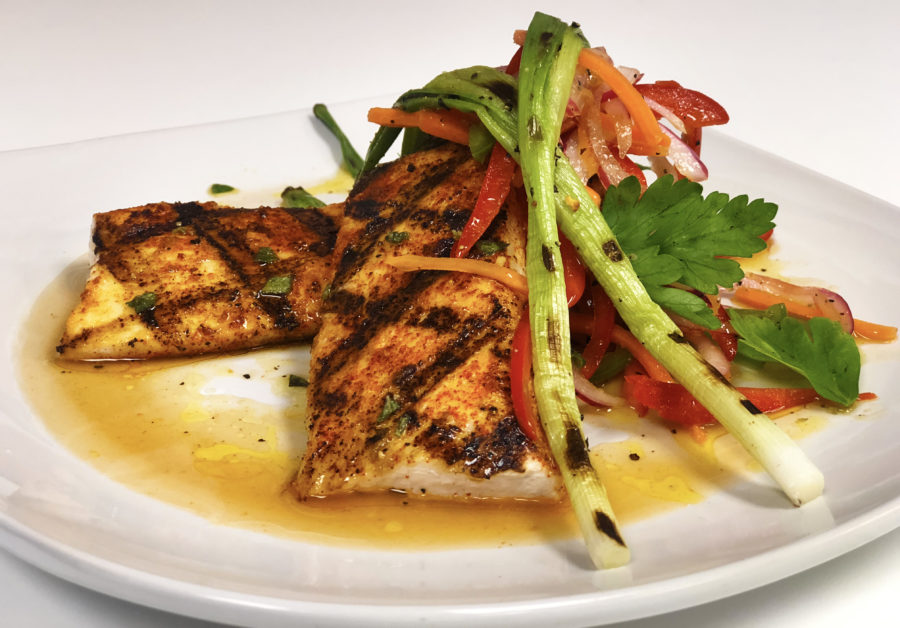 The secret weapon of this mahi-mahi dish is the escabeche. In many Latin American and Mexican kitchens, escabeche refers to marinating fish or another protein in an acidic mixture. But vegetables prepared with this method become a light side dish with a nice acidic bite that pairs well in the summer with a lighter protein like mahi-mahi.

1Place the vegetables in a large mixing bowl.

3Let marinate for at least two hours at room temperature.

4Pre-heat the grill to medium-high heat, about 600 degrees at the GrillGrate surface.

5Spray the top side of the mahi-mahi filets and cover with mixture of salt, pepper, smoked paprika, and cumin. Flip over and repeat on other side.

6Once the grill is properly heated, lay the filets on the grill and close the lid.

7Wait three to four minutes and lift each filet with the GrateTool and turn 90 degrees and place back on the grill for another two minutes.

8Flip each filet over

9Place the green onions on the grill and shut the grill lid.

10After three to four minutes, remove fish from grill. Continue grilling the green onions until you see some charring. Remove onions from grill.

11Plate with the escabeche and garnish with green onions.

Check out these recipes: